About the project of a MME Scenario Collection

The aim of the scenario collection is to provide deploying military medical personnel and those who organise trainging and education with a tool to better prepare for future missions.

The desideratum of a MME case collection has been reiterated during a joint workshop of the MILMED COE and ICMM RefC held in Munich on 14-16 September 2015. The CMME has participated actively in that workshop and agreed to establish the MME case database in close cooperation with the ICMM RefC. It was agreed, that the MILMED COE will be consulted and invited to contribute to the database project and that it will be open to other interested persons or institutions from both academia and the military.
As a follow-up, a small workshop was held at the CMME in ZÃ¼rich on 29.02. /01.03.2016 with the aim of defining the outline of the MME case collection and database project. The current version of the database is strongly based on the results of this workshop.
First ideas and a sketch of the project have been presented during the 2016 ICMM Lilienberg workshop, the PowerPoint presentation is attached to this page (scroll to the end).

The collection of observations and reports on ethical challenges for military medical personnel during missions has been proven to be difficult for several reasons. For example, those returning from missions can on the one not be easily approached by outsiders and they may also be reluctant to openly talk about their experiences.
However, training and research in the field of military medical ethics should both be based on real-world or at least realistic case descriptions and scenarios. Only then can training cover the issues relevant for missions and prepare the personnel for the challenges they could encounter. Research as the basis of education and training in military medical ethics, on the other hand, should similarly be oriented towards the needs and issues, which in fact arise as problems on the field and pose challenges during missions.

Main aims of the database

The project shall offer an environment and workflow that allows on the one hand to enter cases and observations and, on the other hand, to access the case collection via database queries in order to get selected collections e.g. based on issues. Thus, the database will on the one hand offer a forum to (anonymously) report observations from missions. On the other hand, over the time and as these reports come in the database will grow up to offer to trainers and researchers an extensive collection of issues and scenarios that are informed by real-world experiences and constitute actual challenges in the field.

In addition, short analyses and introductory comment documents on the ethical aspects of central issues (like mixed loyalties, medical rules of engagement etc.) shall be written and be published to provide a basic guidance to analyse the scenarios or to use them during training. These documents will be linked to the relevant scenarios according to keywords.

Target Audience: Who benefits and contributes? 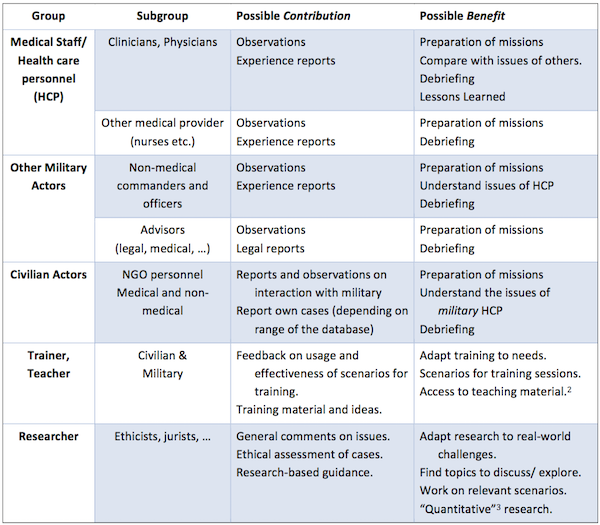 Even though the CMME will host the database, it will (hopefully) not be the only user. On the contrary, the project shall be planned and realized in a way that allows other users (institutions and individuals) to equally benefit from it. This is the main reason why other potentially interested actors have been involved in the development of the project from the beginning.

Scope of cases collected in the database

The scope of the observations and more importantly the scenarios and case studies, which are collected and presented in the database, will (at the beginning) be restricted to the field of military medical ethics (MME). This means that the common denominator of the collected issues is to be found in the military context and in relation with the provision of medical care. Within that sphere, cases will cover issues of combat related medical care as well as humanitarian missions or UN operations (PEO, PKO).

In a later phase, the collection could be extended (if this is deemed to be constructive and reasonable) to include similar issues from related civilian fields of work that e.g. to the kind of ethical problems that humanitarian actors may encounter. Their experiences and ethical issues encountered for example during disaster relief missions share some similarities and are therefore also of interest for military actors.
Possibilities of cooperation will be explored at a later stage; interested individuals or organisations are invited to contact Daniel Messelken (messelken@ethik.uzh.ch)